To understand the scope of the problems that children with incarcerated parents face, you must first be able to grasp the origins of mass incarceration in America and how it impacted entire families and communities.

Harvard Criminal Law Professor Carol Steiker gives a brief background in her introduction on the causes, consequences, and exit strategies to mass incarceration. Since 1972 the incarceration rate in America has increased fivefold to more than 716 per 100,000 people.

The United States has the highest incarceration rate in the world.

In the 1970s there was a monumental push for “tough on crime” laws which led to unprecedented sentencing guidelines, especially for drugs, and lengthy sentences for nonviolent crimes. Lawyer and Professor Michelle Alexander’s book The New Jim Crow: Mass Incarceration in the Age of Colorblindness discusses how the so-called War on Drugs single handedly drove much of the increase in incarceration rates. Professor Alexander also examines the disproportionate impact these laws and sentencing guidelines had, and continue to have, on the African American community. She states that these policies had a broad impact on fundamental rights and access to services such as: “the right to vote, to serve on juries, to receive public benefits, to be free from discrimination in employment and housing, and to earn wages free from garnishment as fees or fines.” She argues that “these cumulative effects demonstrate that mass incarceration, together with Jim Crow and slavery before it, have operated as tightly networked systems of laws, policies, customs, and institutions that operate collectively to ensure the subordinate status of a group defined largely by race.”

This 2010 graph from prisonpolicy.org is a visual representation of the racial disparities of incarceration.

On July 14, 2015 then President Barack Obama, tweeted that

Estimates from The Pew Charitable Trusts surveys (2010) state that U.S. children who have experienced having a parent in the criminal justice system reach over 10 million. Also noted is that 50% of children who have an incarcerated parent are under the age of 10 (Annie E. Casey Foundation Kids Count, 2016). 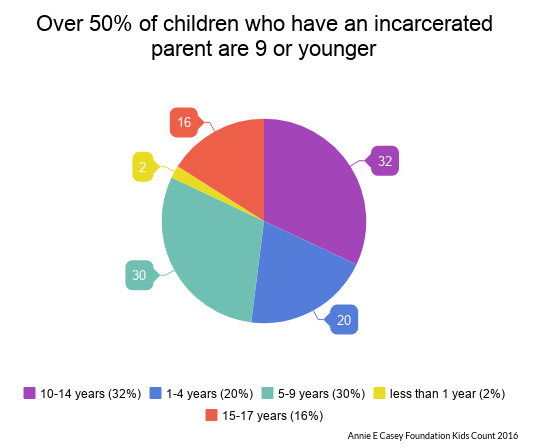 Author, professor, and activist James Kilgore was incarcerated for 6 years in a California prison after being extradited from South Africa in 2002. He has since written books and given interviews on his perspective about how mass incarceration is the “biggest domestic policy debacle”. In his book Understanding Mass Incarceration: A People’s Guide to the Key Civil Rights Struggle of Our Time, he is careful to note that “mass incarceration is not just about the number of people behind bars – there are lots of dots to connect.”

He discusses the concept of transformative justice (rather than restorative justice). He points out that restorative justice techniques are useful “in low-level conflicts, particularly at the neighborhood level. They offer ways to heal the wounds of harm. But the harms wrought by mass incarceration require much more than individuals accepting responsibility for their actions and making amends” (Law, 2015, October 1). He goes on to delineate that transformative justice would require “apologies…from the perpetrators of mass incarceration, those who designed it, those who made money from it. But more importantly, we need to see a massive payment of reparations to communities that have been devastated by having large numbers of their residents carted off to prison. Some people call this justice reinvestment. This means funding education, job creation, child care, counseling, substance abuse counseling, mental health care – a whole range of services…that are vital to reverse the negative impact of mass incarceration.” (Law, 2015, October 1) He goes on to illustrate that America must stop dumping individuals released from “prison out onto the street and expect them and the under-resourced communities where they live, to prosper” (Law, 2015, October 1).

Connecting another dot from Transformative Justice, education policymakers examine various ways to diminish the achievement gap in classrooms through talking about how to alter what is happening inside the classroom. However, Economic Policy Institute (EPI) research associate, Leila Morsy, declared that “making changes to criminal-justice policy can make as much, if not more, of a difference [for children].” The EPI has produced reports that show how the impact of having an incarcerated parent translates to learning obstacles and health challenges for children. “After a parent is imprisoned, children’s grade-point averages fall, as the likelihood of dropping out of school rises. Compared to children of non-incarcerated parents, these youth show a higher incidence of anxiety (51 percent more likely) and depression (43 percent), and are considerably more likely to be diagnosed with post-traumatic stress disorder (72 percent), attention-deficit hyperactivity disorder (48 percent), and behavioral issues (43 percent).” The report identified these specific challenges as greatly interfering with a child’s ability to learn in the classroom, subsequently widening the achievement gap.

Changes must occur for the cycle of incarceration and decimation of families and communities to end.

But where do we even begin?

Perhaps, as Professor Alexander said, our biggest hurdle for stimulating any transformative change is by first closing the “empathy gap” that obstinately exists between the “law abiding and the criminally convicted”.